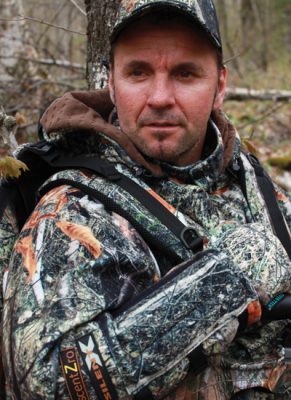 Réal Langlois was born in 1960 in Magog, Quebec. In 1976, he travelled to Abitibi-Témiscamingue with his father for his very first hunting expedition, where he harvested his first bull. From that moment on, his passion for hunting never waned.

Season after season, for over 40 years now, Réal has fuelled his passion for hunting, travelling across Canada and perfecting the art of bow and rifle hunting. He spends countless hours studying the behaviour of moose in a variety of territories and developing calling techniques and innovative Stalk hunting techniques, both of which have garnered him unrivalled success wherever he goes.

In the early 2000s, he travelled to the picturesque Yukon, deep in the heart of the wild, where the “giants” of the forest were believed to be. The first moose he harvested there was an impressive bull with a rack spanning 170 cm (67 in.) across. The whole experience was caught on camera.

That was the start of an amazing Yukon experience. Ever since that first trip, Réal has been undertaking yearly trips to the Yukon as a guide and film producer.

Réal is the popular host of conferences all across Quebec. He is also a hunting instructor, TV show host for channels CIMT, CHAU, CFTF, Wild TV and the Sportsman Channel (United States) and a regular contributor to the magazine Sentier Chasse-Pêche. Rack Man products and DVDs are sold in several specialty boutiques across Canada and the United States.