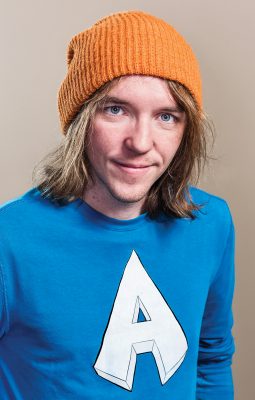 ALEX A. is both author and illustrator of Super Agent Jon Le Bon. He discovered his love for drawing and creating cartoon characters at the early age of eight and has been at it ever since. His limitless imagination allows him to create new plots and twists and even completely new universes for his wacky and offbeat characters. He’ll tell you that his main source of inspiration is “all that exists but especially all that doesn’t exist.” Alex A. lives in Montreal with his dog Wolfy and always shows up for book signings in his distinctive wool hat and colorful plaid pants, ready to entertain his readers.

We are very proud to present Alex A.'s new website!