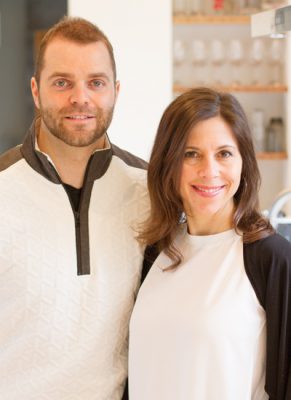 Philippe Grand and Stéphanie Côté are both registered dietitians at Extenso, the nutrition research center at Université de Montréal. Because they work together, they know each other well and can leverage each other’s strengths. For example, Philippe is a better cook than Stéphanie because he graduated from the Institut du Tourisme et d’Hôtellerie du Québec (ITHQ). After training as a chef, he worked in the restaurant business for several years. So he knows more – quite a bit more – than Stéphanie when it comes to the kitchen, which is why he developed most of the recipes in this book. Though he is a connoisseur with a refined palate, he did agree to a few very good recipes submitted by his friend and colleague.

Stéphanie writes better than Philippe. In 2000, she was awarded the Fernand-Seguin Fellowship, which recognizes emerging talents in scientific reporting. She worked for Protégez-Vous, Ricardo, Naître et grandir and other media outlets where she put her skills to good use. Stéphanie also has a master’s degree in sports nutrition, so she handled the part of the book that addresses theory. She graciously accepted some of Philippe’s comments.

When it comes to sports, Stéphanie runs faster and further than Philippe, but he has more physical strength. On cross-country skis, they move at the same speed, although Philippe is slightly less aerodynamic because of the icicles that form in his beard.

Marc Alain's Happiness - One day at a time ranked No. 3 on The Bestsellers List

After only two weeks of publication, Marc Alain's Happiness - One day at a time is no. 3 on The Globe and Mail's Bestsellers List - Self-Improvement.